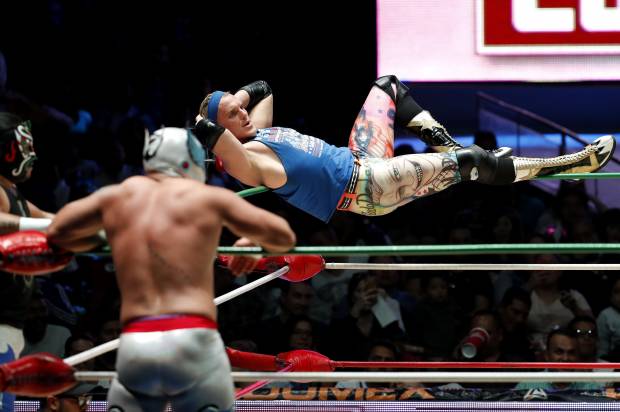 Pro wrestler Sam Polinsky working under the name of Sam Adonis balances himself on the corner ropes during a bout at Arena Mexico in Mexico City, Sunday, Feb. 12, 2017. A native of Pittsburgh, Polinsky came to Mexico last year and the Trump campaign gave him the unparalleled chance to play the ultimate ring villain. “What they want to say to Donald Trump they can say to me and feel good about it,” he says. (AP Photo/Eduardo Verdugo) (Credit: AP)

Advertised as the “Showcase of the Immortals,” WrestleMania isn’t just the Super Bowl for World Wrestling Entertainment (WWE), it’s an economic boon to the city lucky enough to host.

Last year’s WrestleMania 33 made a US$181.5 million economic impact on the Orlando region. But even with its 1.5 million-subscriber streaming network and immense social media following, WWE wasn’t the only game in town.

Smaller groups such as Ring of Honor, EVOLVE and Progress also put on shows in Orlando for its fans. Under the corporate shadow of the WWE, a vibrant independent wrestling scene flexed it muscles.

I spoke with those plying their trade outside of WWE, and they told me that they’re finding it easier to make …read more