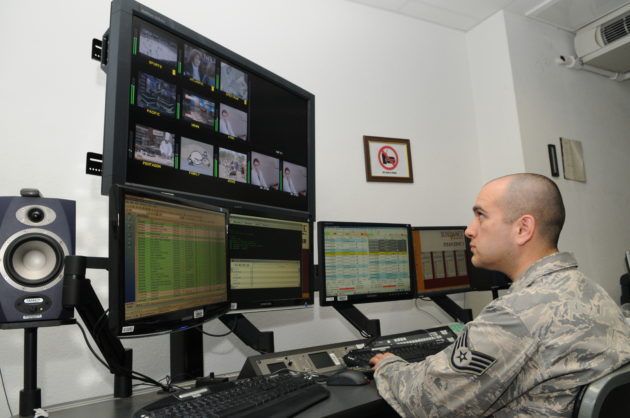 Staff Sgt. Modesto Alcana manages air times on the American Forces Network at Spangdahlem Air Base in Germany, as seen in a photo from 2011. (USAF Photo / Nick Wilson)

News Brief: Talk about a political football! One of the more unusual twists to this weekend’s government shutdown is that the U.S. military’s TV network won’t be showing NFL football playoffs. Overseas military families think that’s a real shame, and so does Boeing. In a tweet, Boeing is offering to “do whatever needed” to facilitate broadcasting the games on the American Forces Network. It’s not clear what logistics or legalities would have to be addressed. But if worse comes to worst, the games will be available at overseas USO centers and via commercial streaming services such as NFL Game Pass, according to NFL spokesman Brian McCarthy.

.@CBS @FOXTV @NFL @POTUS — #Boeing here to help do whatever needed to show the #NFLPlayoffs on @AFNTelevision to our troops EVERYWHERE. Let us know! ??????