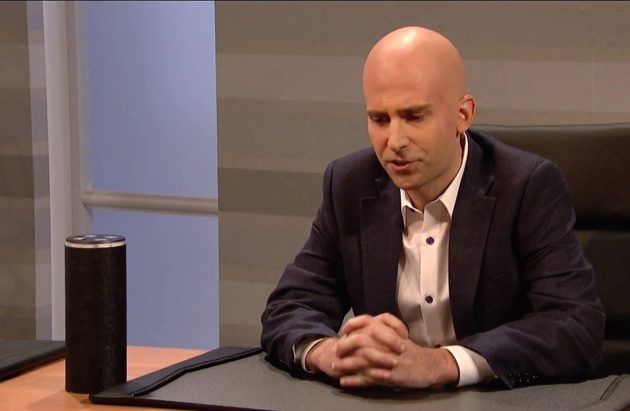 Amazon’s HQ2 search made it all the way to “Saturday Night Live” tonight, with a skit that depicts Jeff Bezos receiving delegates from cities in the company’s top 20 — assisted by Alexa, of course.

So who did NBC’s comedy writers pick as the final four for the Seattle-based online retailing giant’s second headquarters, with 50,000 high-paying jobs and $5 billion at stake?

There’s Boston, with Casey Affleck (played by Alex Moffat) putting in an underwhelming pitch. (“I live in L.A. now … maybe put your office there?”)

Newark, N.J., is represented by Sen. Cory Booker (Chris Redd), who admits “I know we’re not getting this at all” and storms away with a #TearsOfRage hashtag.

And then there’s Miami, “a diverse group of people, all living in harmony together: Cubans, Jews, gays … lizards, bugs, beans, cocaine!” Their celebrity representative is Pitbull (Mikey Day).