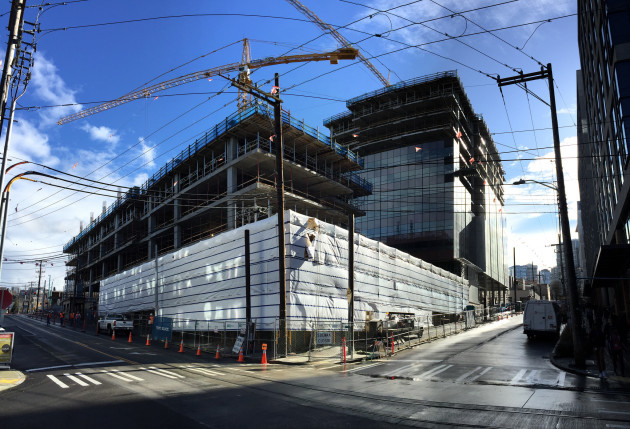 Amazon’s growth in the South lake Union neighborhood is a big factor in the squeeze on available homes and condos in Seattle. (Kurt Schlosser / GeekWire)

In Amazon’s hometown, Seattle, the growth-hungry e-commerce juggernaut has had a measurable impact on housing costs. That doesn’t always sit well with Seattleites who lived in the city before the Amazon boom. High housing costs can also be a recruiting issue, though Seattle is still far more affordable than the Bay Area where many other tech titans are located.

Related: Amazon narrows HQ2 search to 20 cities, moving to next phase in contest for $5B economic prize

Still, Amazon’s experience in Seattle and desire to attract top talent could make housing affordability a factor as the company decides which where it will locate HQ2, the $5 billion second headquarters announced last Fall. If Amazon is looking closely at housing costs, Chicago, Pittsburgh, and Columbus are the best bets, according to a new analysis from Trulia.

Trulia, a real estate website under the Zillow Group umbrella, looked at housing affordability, housing inventory, and “Amazon’s own prerequisites” to come up with those three cities. Trulia’s chief economist, Ralf McLaughlin, analyzed affordability and price data from the site’s inventory …read more