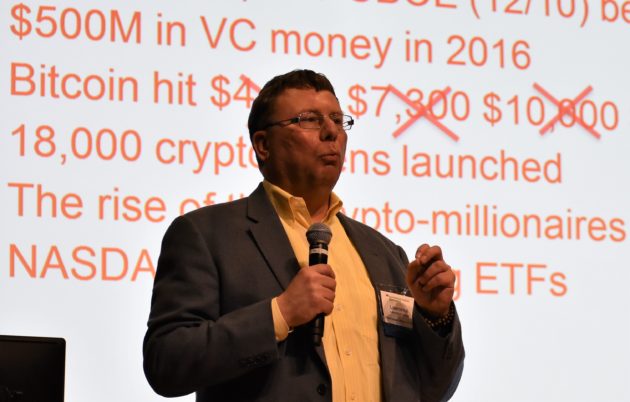 Even bitcoin’s boosters acknowledge that cryptocurrencies aren’t a sure thing.

Just in the past month, China and South Korea signaled that they might be cracking down harder on trading in digital currencies, which caused bitcoin prices to tumble from a peak of nearly $20,000 per coin to around $12,000.

“”For any of you that own cryptos, this was a rough week,” said John Utley, an IBM sales executive who focuses on blockchain and software-as-a-service verticals.

But the uptick is much steadier for blockchain — the digital technology that underlies cryptocurrencies as well as other recordkeeping applications.

“At the enterprise level, our lead-in item is blockchain,” Utley said last Wednesday at Seattle University, during a presentation organized by MIT Enterprise Forum of the Northwest.

So what is blockchain?

In depth: What is blockchain? GeekWire’s guide to the technology and its potential

It’s a system of recording and encrypting a series of digital transactions (“blocks”) in such a way that anyone involved in the transaction can follow the chain of those transactions back to the source.