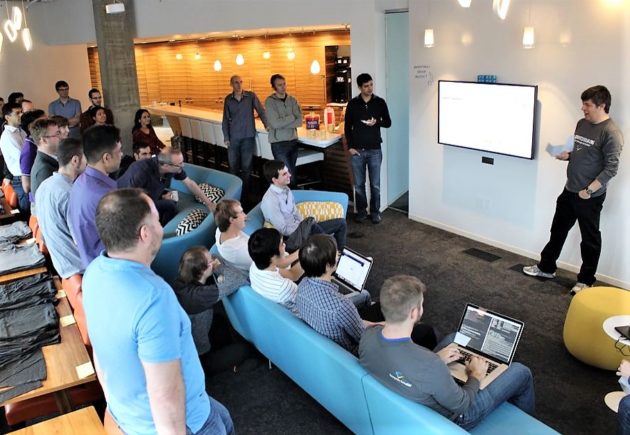 Team members at the Allen Institute for Artificial Intelligence celebrate the launch of Semantic Scholar during an impromptu meeting at the institute’s Seattle headquarters. (AI2 Photo via Glassdoor)

Is technical expertise the key to success in the fast-moving world of artificial intelligence market? Or is it entrepreneurship?

Top-notch engineers with a yen to build a startup can get the best of both worlds through a newly created CTO residency program at Seattle’s Allen Institute for Artificial Intelligence, or AI2.

“Google has DeepMind, Facebook has FAIR, Microsoft has Microsoft Research AI,” Jacob Colker, managing director of the AI2 Incubator, told GeekWire. “But AI2 is one of the few places where entrepreneurs and early-stage startups can access the same kind of talent that’s available to the big guys.”

The residency program will be open to talented engineers who are typically working at a senior level or coming from a recent startup at the level of chief technology officer.

“We’re looking to create an opportunity for these engineers to launch the next billion-dollar company,” Oren Etzioni, AI2’s CEO, said today in an announcement unveiling the program.