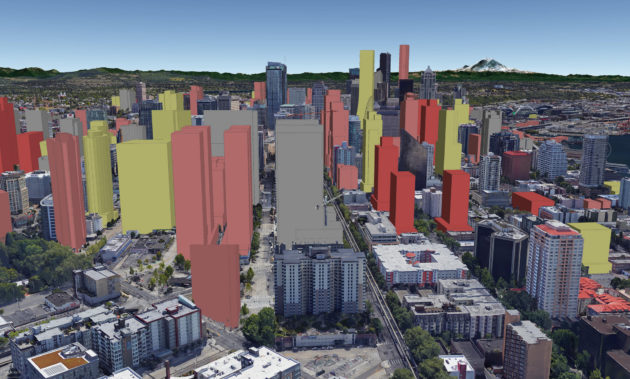 Taking in the Seattle skyline is a favorite pastime for many residents and visitors to the city, thanks in large part to the unique vantage points located in various neighborhoods. Whether it’s from Kerry Park in Queen Anne or across Elliott Bay from Alki, Seattle is nothing if not pretty to look at.

But as we’ve been learning for years, especially during the city’s most recent tech-fueled boom, the views they are a-changin’. A viral video capturing just three years of Seattle’s transformation in time-lapse form — created with 360-degree photographs taken by a Space Needle camera — touched a nerve a few weeks ago.

And now a Seattle architectural designer is sharing images he created using 3D modeling over Google Earth to further illustrate what is happening in Seattle as more and more buildings rise and take their place in the skyline. Most dramatically, the images show what’s still to come as buildings that are under construction or still-rumored projects are squeezed into assorted views from across the city.

A Google Earth view from the Space Needle with 3D modeling added to the city. Grey buildings are completed, yellow is under construction, light red is proposed and dark red is rumors …read more