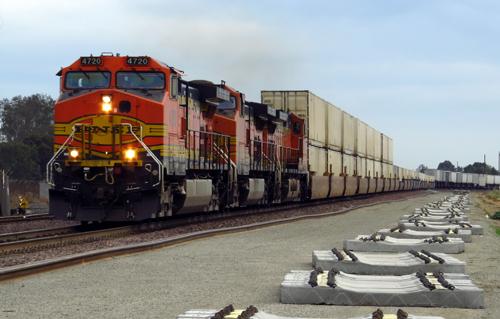 OAKLEY — The stewards of a six-acre field of century-old vineyards have sued the nation’s second largest railway company, alleging that the railroad’s indiscriminate spraying of herbicides is harming the grapes and almonds being grown there.

Last week, a group called Mulehead Growers — which manages a large patch of vineyards around 3231 Main Street in Oakley — sued the Burlington Northern Railroad Company, better known as BNSF, for unspecified damages. BNSF, second only to Union Pacific in its size and miles of track owned, controls most of the railroads in East Contra Costa including a mile-long section that runs adjacent to the vineyard.

The suit also names pesticide companies Ferrosafe, Rumble Spray and Alligare as defendants, and alleges that BNSF has been using those companies’ products, including some that contain the chemicals flumioxazin and imazapyr as active ingredients. Imazapyr is a so-called “non-selective” herbicide, meaning it kills plants more indiscriminately. It is commonly used, though people are dissuaded from using it around desirable plants and trees.

The suit alleges that the railroad company began using the chemicals for weed control on the railroad in early 2016, and that within weeks, the curators of the vineyard property started to notice that the …read more