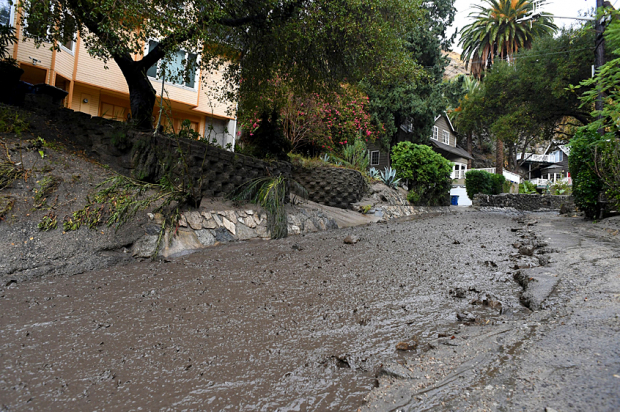 Rain and mud flow out of an neighborhood under mandatory evacuation in Burbank, California, January 9, 2018. (Credit: Getty/Robyn Beck)

Several weeks after a series of wildfires blackened nearly 500 square miles in Southern California, a large winter storm rolled in from the Pacific. In most places the rainfall was welcomed and did not cause any major flooding from burned or unburned hillslopes.

But in the town of Montecito, a coastal community in Santa Barbara County that lies at the foot of the mountains blackened by the Thomas Fire, a devastating set of sediment-laden flows killed at least 20 people and damaged or destroyed more than 500 homes. In the popular press these flows were termed “mudslides,” but with some rocks as large as cars these are more accurately described as hyperconcentrated flows or debris flows, depending on the amount of sediment mixed with the water.

Why did these deadly flows happen? To what extent were these flows caused by the fire, the extreme burst of rainfall, or a combination? And what can we do to reduce similar risks in the future?

Some national newspapers are saying that these post-fire flows are caused by the loss of vegetation, but as a …read more