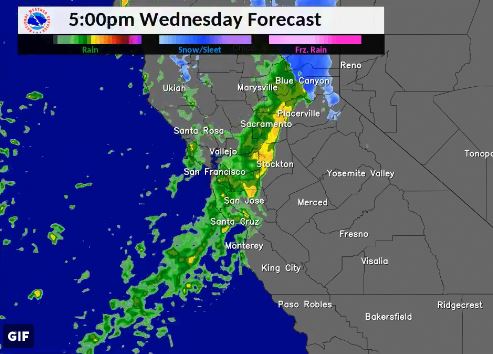 A “run-of-the-mill” winter storm system expected to make for a wet commute Wednesday afternoon across the Bay Area could be the region’s last round of rain of January.

The National Weather Service is forecasting the return of a ridge of high pressure that will block any storm systems from reaching the Bay Area, instead sending the rain to the northern most parts of California, Oregon and Washington.

Forecasters with the weather service say computer models suggest the ridge will remain in place into early February.

“It looks like we’re in for a break through the middle part of next week, if not late next week,” Garcia said.

Increasing rain chances from north to south starting later this morning. Steady rain will turn to showers as the cold front passes. Here’s a look at the NAM reflectivity forecast.#CAwx pic.twitter.com/iZ110fk9wC

Before the stretch of dry weather, the Bay Area will get one last soaking Wednesday, with rainfall totals for most cities ranging from a quarter-inch to half-inch, Garcia said. Higher elevations, including the North Bay hills and mountains and Santa Cruz mountains, could see heavier rainfall.