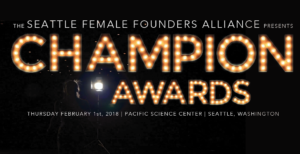 The #MeToo movement was one of the defining forces of 2017, changing the conversation around the sexual harassment and discrimination that women face in the workplace and in all walks of life.

So it’s fitting to celebrate the new year by celebrating the people, companies and organizations that affect women positively. That’s the goal of the 2018 Champion Awards, four accolades organized by Seattle’s Female Founders Alliance that will be awarded in February.

The event takes place at the Pacific Science Center in Seattle and will feature the announcement of the award winners, plenty of food and drink and one of the biggest gatherings of female entrepreneurs in Seattle’s history. Check out the awards website for full details. All women professionals in Seattle are also invited to vote for the winners.

That’s one of the highlights from our