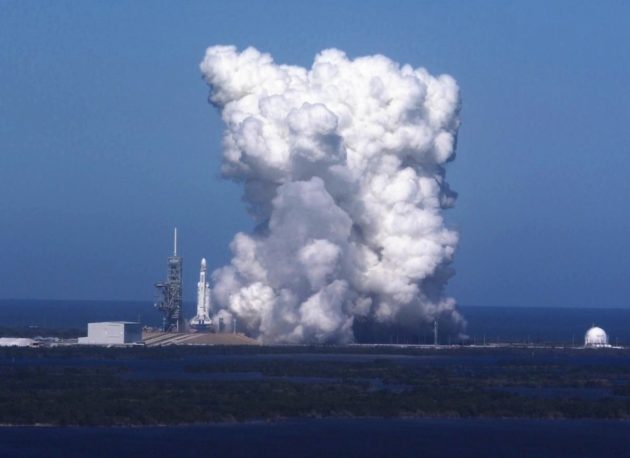 SpaceX’s Falcon Heavy rocket is dwarfed by clouds of steam during a static-fire test. (Elon Musk via Twitter)

SpaceX test-fired all 27 Merlin rocket engines on its mammoth Falcon Heavy rocket for the first time today, throwing up clouds of smoke and steam and sending out the roll of thunder from Kennedy Space Center’s historic Launch Complex 39A in Florida.

The company’s billionaire founder, Elon Musk, reported in a tweet that the hold-down firing was “good.”

“Launching in a week or so,” he said.

Falcon Heavy hold-down firing this morning was good. Generated quite a thunderhead of steam. Launching in a week or so. pic.twitter.com/npaqatbNir

The three-core Falcon Heavy is shaping up to become as the world’s most powerful rocket in operation, with a liftoff thrust of 5.1 million pounds. Eventually it could be used to send payloads to the moon or Mars, but the first flight is designed solely to test its performance.

There will be at least one significant payload aboard, however: Musk’s cherry-red Tesla Roadster sports car, which is meant to be sent into a widely looping orbit stretching out as far as Mars.

Musk decided to put the car on the Falcon Heavy, …read more