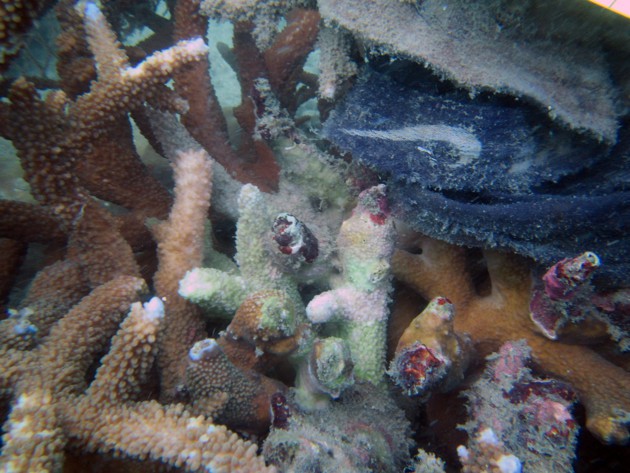 Coral reefs are meant to be riots of color, but those that Joleah Lamb studied in the Indo-Pacific were colorful for all the wrong reasons. Their branches and crevices were frequently festooned with plastic junk. “We came across chairs, chip wrappers, Q-tips, garbage bags, water bottles, old nappies,” she says. “Everything you see on the beach is probably lying on the reef. And it seems like it’s getting worse.”

Whenever Lamb or her colleagues from Cornell University found a piece of plastic, they would lift it up to study the health of the coral underneath. And almost every time, that coral would be riddled with disease. “It’s just a disaster under there,” she says.

Over four years, the team analyzed more than 124,000 corals, spanning 159 reefs in four countries: Myanmar, Thailand, Indonesia, and Australia. They found that under normal circumstances, just 4 percent of corals are afflicted by some kind of disease. But infections strike down 89 percent of corals that come into contact with plastic.

“I didn’t think we would be the ones to write this study,” says Lamb, because other scientists have already done so much …read more