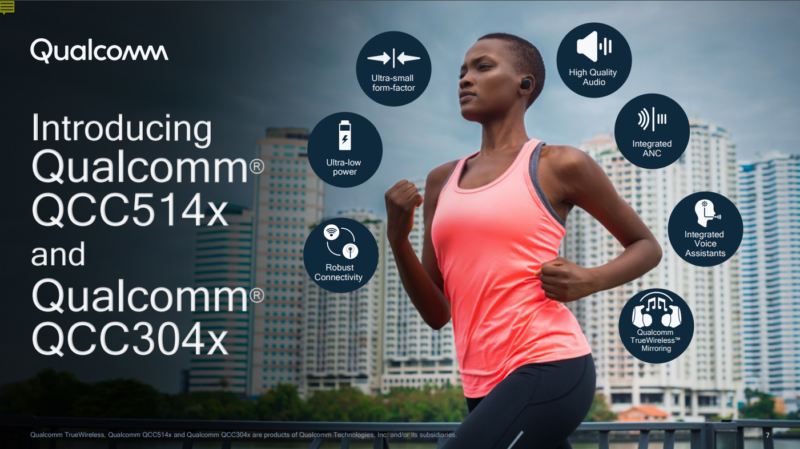 Qualcomm is introducing a new slate of chips for truly wireless Bluetooth earbuds. You might not have realized it, but these Bluetooth earbuds are tiny computers now, and just as Qualcomm makes smartphone SoCs that end up in most smartphones, it also makes “Bluetooth Audio SoCs” that end up in a host of Bluetooth headphones. There are two chips in Qualcomm’s announcement, the QCC514x and the QCC304x, with the difference being that the 514x SoC is built for always-on voice recognition using assistants from Google and Amazon. You’ll be able to just shout the wake word, and the headphones will pick up.

As you might expect, the focus is on better battery life, with Qualcomm promising 13 hours of playtime from a 65mAh battery. Active noise canceling (ANC) is built into both SoCs, so expect to see this high-end feature make its way to many more headphones in the future. There’s also a “Hybrid ANC” mode, which lets some sound from the real world in so you can remain aware of your surroundings. Qualcomm also has a feature called “TrueWireless Mirroring,” which lets you use the left or right earbuds in mono …read more