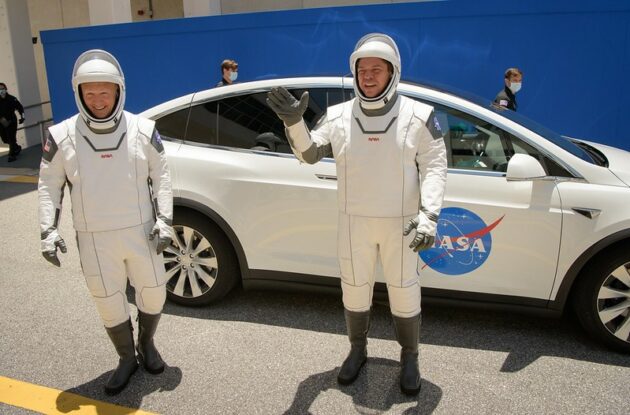 NASA astronaut Bob Behnken waves to onlookers outside the Armstrong Operations and Checkout Building at Kennedy Space Center in Florida, just before he and crewmate Doug Hurley get into a Tesla Model X car for the drive to Launch Complex 39A and a rehearsal of next week’s countdown. (NASA Photo / Bill Ingalls)

NASA and SpaceX put astronauts Doug Hurley and Bob Behnken and the rest of the team at Kennedy Space Center in Florida through a “dry dress rehearsal” today in preparation for next week’s historic launch to the International Space Station.

The simulated countdown covered all of the steps on the timeline for sending the two astronauts on the first-ever crewed trip into space aboard SpaceX’s Crew Dragon, up to the point of loading propellants into the SpaceX Falcon 9 rocket at Launch Complex 39A. Hurley and Behnken rode to the pad in a NASA-branded Tesla Model X SUV ⁠— which is a cross-promotional touch for billionaire Elon Musk, who serves as CEO for Tesla as well as SpaceX.
Such rehearsals have been part of the routine for NASA’s crewed space launches, going back to the early days of the space race. But this time, every step in the timeline …read more