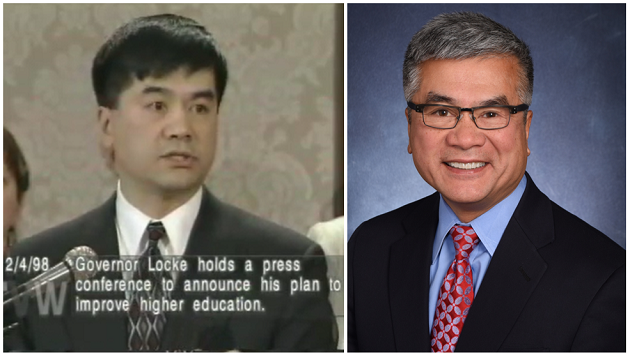 At left, Washington Gov. Gary Locke announces the formation of the “2020 Commission” on higher education at a press conference in February 1998, via Washington State Archives. Locke, pictured today at right, went on to become U.S. Secretary of Commerce and U.S. Ambassador to China.

A longtime contact of mine recently emailed a New York Times article from June 18, 1998: “Virtual-Classes Trend Alarms Professors.” Viewed through the lens of 2020, the headline was worthy of The Onion. But it got even better.

“About 850 professors at the University of Washington have signed an open letter to Gov. Gary Locke to say they are worried about the enthusiasm he and one of his advisers are showing for instruction via CD-ROM’s and the Internet,” the story read.

And here’s the kicker: This controversy focused on a group called the “2020 Commission,” created by Locke in 1998 to set a vision for higher education in some far-off year when, unbeknownst to anyone at the time, virtual classes would become a reality for professors and students around the world, like it or not.

If any story deserves revisiting right now, it’s this one.

So I got in touch with Locke, who was Washington state’s 21st governor from …read more