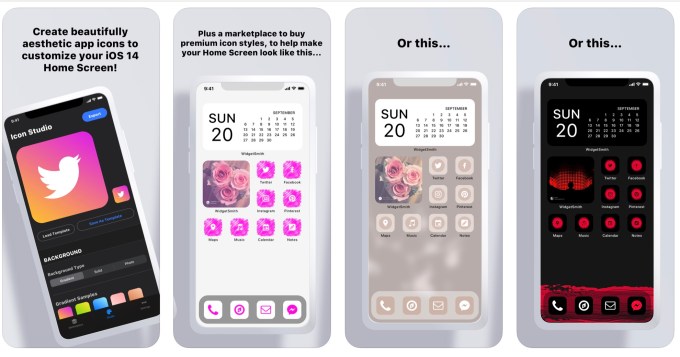 If you want to build your own icons, you can use the “Icon Studio” section in Mycons to get started. Some introductory functionality is offered for free, and a one-time upgrade of $9.99 unlocks the full functionality.

“I wanted to release the app with a handful of basic design features available for free, so users can get a feel for how things work and still be able to make their homescreens look beautiful, without coughing up their hard earned cash,” explains Mycons developer Daniel McCarthy.

Once the Icon Studio’s full customization capabilities are unlocked, you’ll find them to be fairly extensive.

You can pick solids, gradients or even a photo as your icon background, or opt to use a premium background you’ve purchased.

And if you’re setting your own color as the background, Mycons lets you choose between using a color grid, color spectrum, adjusting sliders or entering a specific Hex Color number to get exactly the right shade.

The app also includes a searchable database with thousands of symbols and logos to choose from — including symbols for your most-used apps as well as harder-to-find generic symbols, like the RSS symbol, for instance. For some of the more popular apps — like Facebook, Twitter, YouTube or Snapchat, for example — you’ll even find a few different options to choose from.

Mycons makes it easy to create a whole set of custom icons at once, too.

After you design your icon template style, you can toggle an option, “Enable Batch Export,” to select multiple symbols then apply the same background to all. You then tap the “Export” button to send all the icons to your Camera Roll at once.

If you’re not up for building your own icons, Mycons also offers packs you can buy.

In a separate tab from the Icon Studio, Mycons lets you shop icon packs from designers via one-time in-app purchases. These range in price from $7.99 to $9.99 and include a set of backgrounds (wallpapers) to match the custom icons. In some cases, these are available in multiple colors and styles, too.

Once purchased, you can use the style with your own custom icon designs. That’s an advantage over buying an icon pack off Etsy, for instance, where you only get a set number of icons — but no tools to build your own to match, in the case you’re missing a few.

At launch, the designs offered come from just three creators,

A new app called Mycons, launched today, is tapping into the iOS 14 homescreen customization trend by making it easier for anyone, including non-designers, to quickly create their own custom icons, as well as shop premade icon-and-wallpaper packs from designers.

With the release of iOS 14 in mid-September, millions of users began to take advantage of new functionality like iOS widgets to customize their iPhone homescreens. As a part of this trend, users also rediscovered how to use Apple’s Shortcuts app to create custom icons for their favorite apps in order to match their new homescreen aesthetic.

As a result, homescreen customization apps shot to the top of the App Store in the days and weeks following the iOS 14 launch.

The trend doesn’t seem to be a flash-in-the-pan, either. Today, top custom widget provider Widgetsmith continues to rank at No. 8 on the App Store’s (non-game) top free apps chart, as of the time of writing.

But while most of the new customization apps focus on creating your own iOS 14 widgets, those that help users design their own icon sets are more difficult to find. Some existing apps have retooled to address user demand for icons, like