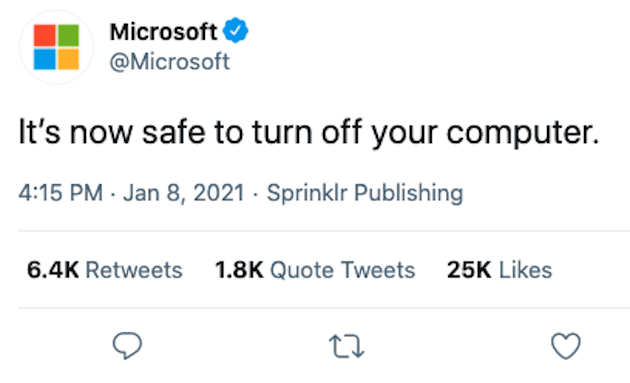 At the end of what’s certainly been a rough week, logging off for the weekend is probably something lots of people were looking forward to. Perhaps that’s the simple sentiment Microsoft was aiming to convey in a tweet posted Friday afternoon.

But timing is everything, even for what could have been a timed tweet.

The Microsoft message, “it’s now safe to turn off your computer,” landed as the internet was going crazy over the news, announced less than an hour earlier, that Twitter was suspending the account of President Donald Trump.

Was Microsoft throwing shade at Trump? That possibility seemed very out of character for a giant company interested in tightly controlling its corporate messaging.

Did a social media employee go rogue? They’ll take it down, right? The tweet was still there at the time of this writing, more than an hour and 35,000 likes later.

Microsoft does offer up its fair share of lighter takes on the account, tweeting such things as “brb, playing Xbox” and “did you forget your password again?”