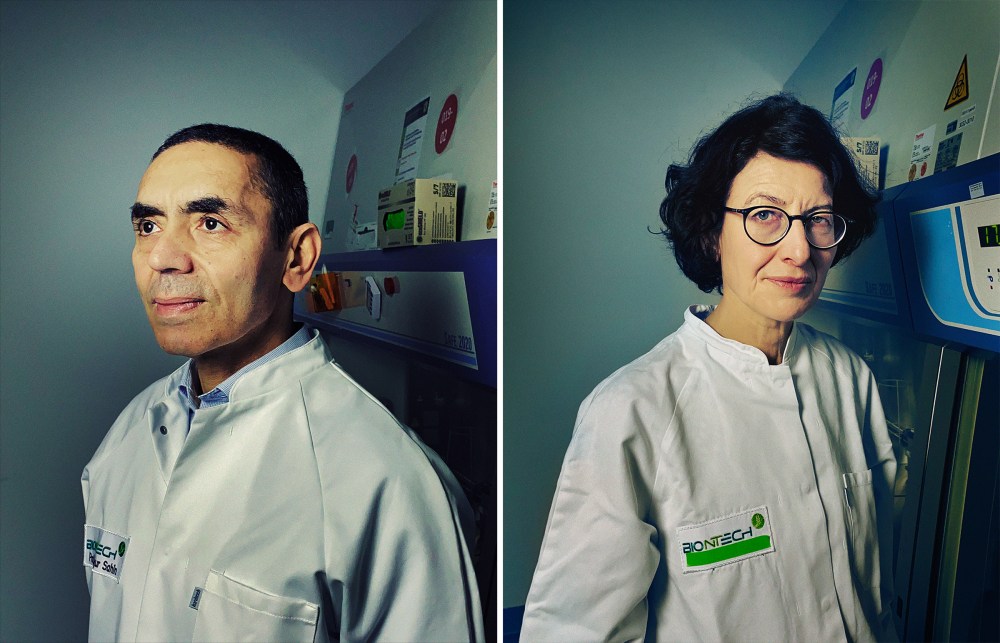 Dina Litovsky—Redux for TIME Drs. Ugur Sahin and Ozlem Tureci, Co-founders, BioNTech. In January 2020, before many in the Western world were paying attention to a new virus spreading in China, Dr. Ugur Sahin was convinced it would spur a pandemic. Sahin, who in 2008 co-founded the German biotech company BioNTech with his wife Dr. Ozlem Tureci, went to work on a vaccine and by March called his contact at Pfizer, a much larger pharmaceutical company with which BioNTech had previously worked on an influenza vaccine using mRNA. Less than a year later, the Pfizer-BioNTech COVID-19 vaccine became the first ever mRNA vaccine available for widespread use. Even so, Sahin, BioNTech’s CEO, and Tureci, its chief medical officer, maintain that BioNTech is not an mRNA company but rather an immunotherapy company. Much of the couple’s work—both at BioNTech and at their previous venture, Ganymed—has focused on treating cancer. But it is mRNA, and the COVID-19 vaccine made possible by the technology, that has pushed the famously hardworking couple into the ­limelight—and helped them become one of the richest pairs in Germany, though they reportedly still bicycle to work and live in a modest apartment near their office.

Up until last year, vaccines had not changed very much, at least in concept, for more than two centuries. Most have been modeled on the discovery made in 1796 by the English doctor Edward Jenner, who noticed that many milkmaids were immune to smallpox. They had all been infected by a form of pox that afflicts cows but is relatively harmless to humans, and Jenner surmised that the cowpox had given them immunity to smallpox. So he took some pus from a cowpox blister, rubbed it into scratches he made in the arm of his gardener’s 8-year-old son and then (this was in the days before bioethics panels) exposed the kid to smallpox. He didn’t become ill.

Before then, inoculations were done by giving patients a small dose of the actual smallpox virus, hoping that they would get a mild case and then be immune. Jenner’s great advance was to use a related but relatively harmless virus. Ever since, vaccinations have been based on the idea of exposing a patient to a safe facsimile of a dangerous virus or other germ. This is intended to kick the person’s adaptive immune system into gear. When it works, the body produces antibodies that will, sometimes for many years, fend off any infection if the real germ attacks.

One approach is to inject a safely weakened version of the virus. These can be good teachers, because they look very much like the real thing. The body responds by making antibodies for fighting them, and the immunity can last a lifetime. Albert Sabin used this approach for the oral polio vaccine in the 1950s, and that’s the way we now fend off measles, mumps, rubella and chicken pox.

At the same time Sabin was trying to develop a vaccine based on a weakened polio virus, Jonas Salk succeeded with a safer approach: using a killed or inactivated virus. This type of vaccine can still teach a person’s immune system how to fight off the live virus but is less likely to cause serious side effects. Two Chinese companies, Sinopharm and Sinovac, have used this approach to develop vaccines for COVID-19 that are now in limited use in China, the UAE and Indonesia.

Another traditional approach is to inject a subunit of the virus, such as one of the proteins that are on the virus’s coat. The immune system will then remember these, allowing the body to mount a quick and robust response when it encounters the actual virus. The vaccine against the hepatitis B virus, for example, works this way. Using only a fragment of the virus means that they are safer to inject into a patient and easier to produce, but they are often not as good at producing long-term immunity. The Maryland-based biotech Novavax is in late-stage clinical trials for a COVID-19 vaccine using this approach, and it is the basis for one of the two vaccines already being rolled out in Russia.

The plague year of 2020 will be remembered as the time when these traditional vaccines were supplanted by something fundamentally new: genetic vaccines, which deliver a gene or piece of genetic code into human cells. The genetic instructions then cause the cells to produce, on their own, safe components of the target virus in order to stimulate the patient’s immune system.

For SARS-CoV-2—the virus that causes COVID-19—the target component is its spike protein, which studs the outer envelope of the virus and enables it to infiltrate human cells. One method for doing this is by inserting the desired gene, using a technique known as recombinant DNA, into a harmless virus that can deliver the gene into human cells. To make a COVID vaccine, a gene that contains instructions for building part of a coronavirus spike protein is edited into the DNA of a weakened virus like an adenovirus, which can cause the common cold. The idea is that the re-engineered adenovirus will worm its way into human cells, where the new gene will cause the cells to make lots of these spike proteins. As a result, the person’s immune system will be primed to respond rapidly if the real coronavirus strikes.

This approach led to one of the earliest COVID vaccine candidates, developed at the aptly named Jenner Institute of the University of Oxford. Scientists there engineered the spike-protein gene into an adenovirus that causes the common cold in chimpanzees, but is relatively harmless in humans.

The lead researcher at Oxford is

I had been staring her in the eyes, as she had ordered, but when a doctor on my other side began jabbing me with a needle, I started to turn my head. “Don’t look at it,” the first doctor said. I obeyed.

This was in early August in New Orleans, where I had signed up to be a participant in the clinical trial for the Pfizer-BioNTech COVID-19 vaccine. It was a blind study, which meant I was not supposed to know whether I had gotten the placebo or the real vaccine. I asked the doctor if I would really been able to tell by looking at the syringe. “Probably not,” she answered, “but we want to be careful. This is very important to get right.”

I became a vaccine guinea pig because, in addition to wanting to be useful, I had a deep interest in the wondrous new roles now being played by RNA, the genetic material that is at the heart of new types of vaccines, cancer treatments and gene-editing tools. I was writing a book on the Berkeley biochemist Jennifer Doudna. She was a pioneer in determining the structure of RNA, …read more