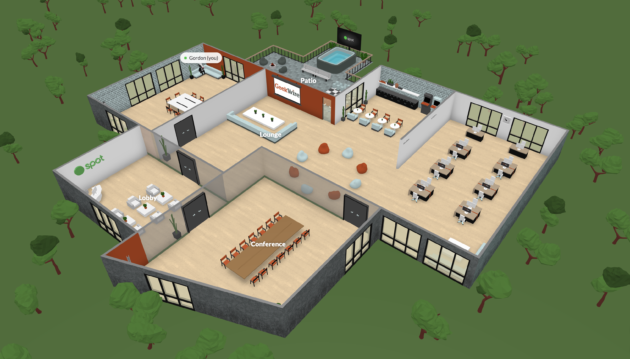 An example of a virtual GeekWire office built with Spot. (Spot Photos)

Company background: GeekWire initially spotted Spot back in June when it was in stealth mode. The 7-person startup is building software that creates a virtual representation of an office. Spot CEO Gordon Hempton compared it to “The Sims for the Enterprise.”

Hundreds of virtual worlds have been created with Spot for events and/or a virtual headquarters. The software is still in a closed beta. “In the future, we plan on creating a true digital world that connects teams to each other both inside and outside of their organizations,” Hempton said.

Tailwinds: The pandemic-driven shift to remote work is driving adoption of virtual work tools — everything from video conferencing to collaboration software. Spot competes with startups such as virtual office space platforms Gather, which just raised $26 million, and Teamflow, which just raised $11 million. There are also a bevy of others such as Virbela and Branch that sell similar virtual HQ software.