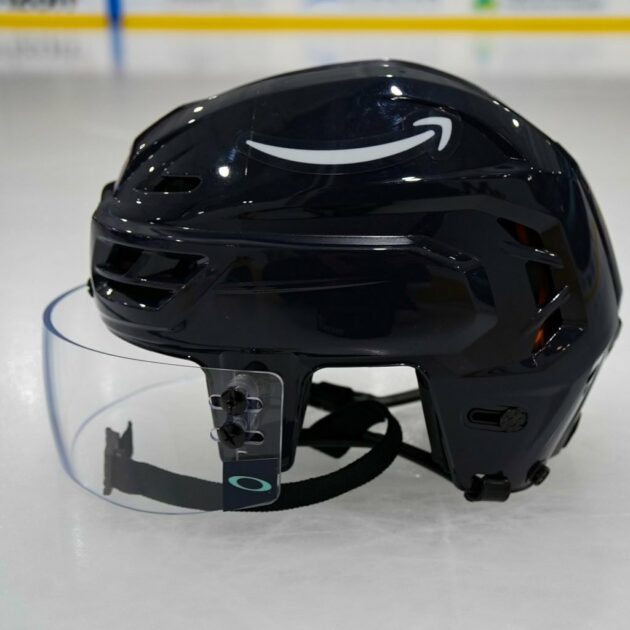 The helmets that will be worn for home games by the Seattle Kraken feature Amazon’s smile logo. (Climate Pledge Arena Photo)

Amazon is adding a little promotional branding on the helmets of the Seattle Kraken, the city’s new NHL team set to take the ice for its inaugural season next month. The tech giant’s smile logo will be affixed to both sides of midnight blue helmets that the Kraken will wear for home games, the team revealed Tuesday.

When the team is away from its home at Climate Pledge Arena, white helmets will feature decals that read “The Climate Pledge,” as a way to draw attention to the effort to get businesses to commit to going net zero carbon by 2040.

Amazon founder Jeff Bezos first announced the creation of The Climate Pledge in September 2019, setting ambitious greenhouse gas emission goals for the tech giant and urging other companies to do the same. In June 2020, Amazon bought the naming rights to the redeveloped KeyArena in Seattle, and put the Climate Pledge moniker on the 18,100-seat venue.

Sneaked a peek at the @SeattleKraken helmets yet? ????

On the road, each player will rep @climatepledge on their …read more