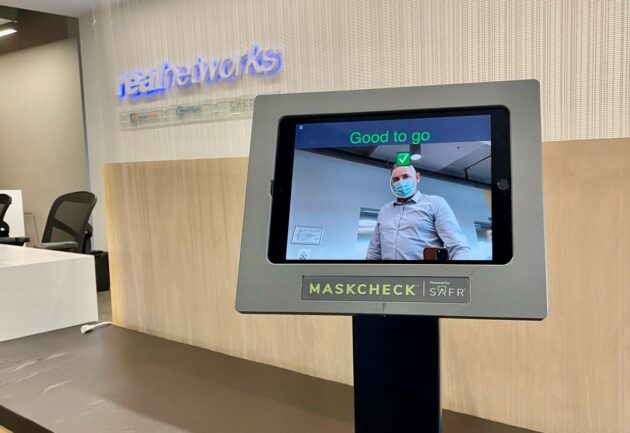 A new MaskCheck Kiosk in the lobby at RealNetworks headquarters in Seattle, demonstrated by Frederick Savoye, vice president of consumer, media and cloud. (RealNetworks Photo)

From its early days as a streaming audio pioneer to its recent expansion into facial recognition technology, RealNetworks has focused on software and services throughout its 27-year history. But the pandemic is pushing many companies to try new things, and the software mainstay is getting into hardware for the first time.

RealNetworks’ new MaskCheck Kiosk, debuting Wednesday for an introductory price of $995, promises to quickly and reliably detect whether people passing by are wearing facemasks. At a little more than 4 feet high, and a sturdy 27 pounds, the MaskCheck Kiosk uses a pre-installed iPad 8. An internal battery in the base charges when plugged in, and lasts for up to three days.

The idea is to encourage and reinforce proper facemask usage, ideally leaving it to technology to avoid what can become awkward or confrontational interactions.

“We’re not trying to make any kind of political statement here,” said RealNetworks CEO Rob Glaser in a virtual demonstration of the kiosk this week. “We’re just trying to launch a product that we think will make the world a …read more