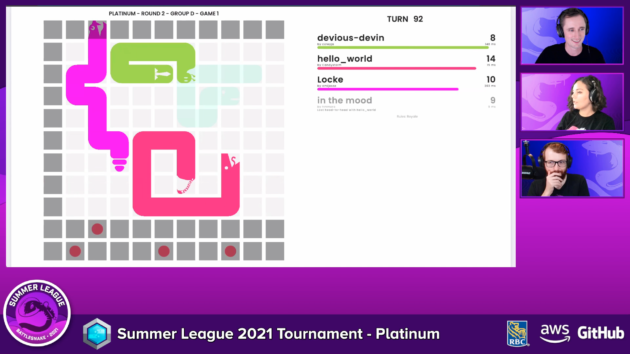 “Battlesnake” action during a tournament broadcast on Twitch. (Battlesnake Image)

Programmers looking to experiment or get better at the tools and technology that they use for their day jobs are turning to a competitive game called “Battlesnake” — made by a company of the same name — to earn bragging rights among a community of coders. Now Battlesnake is turning to Seattle investors for new funding to help the startup expand its reach.

Battlesnake originated in the Pacific Northwest as a developer recruiting event in 2015, and by 2019 the flagship Battlesnake Tournament in Victoria drew 1,200 developers and another 1,000 spectators intrigued by the e-sports-like drama of watching competitors compete with their coded snakes.

Co-founder and CEO Brad Van Vugt told GeekWire that “Battlesnake” sits at a “weird intersection between gaming and programming.” At its core, it’s a game that experienced programmers use to explore new ideas and new algorithms and new technologies.