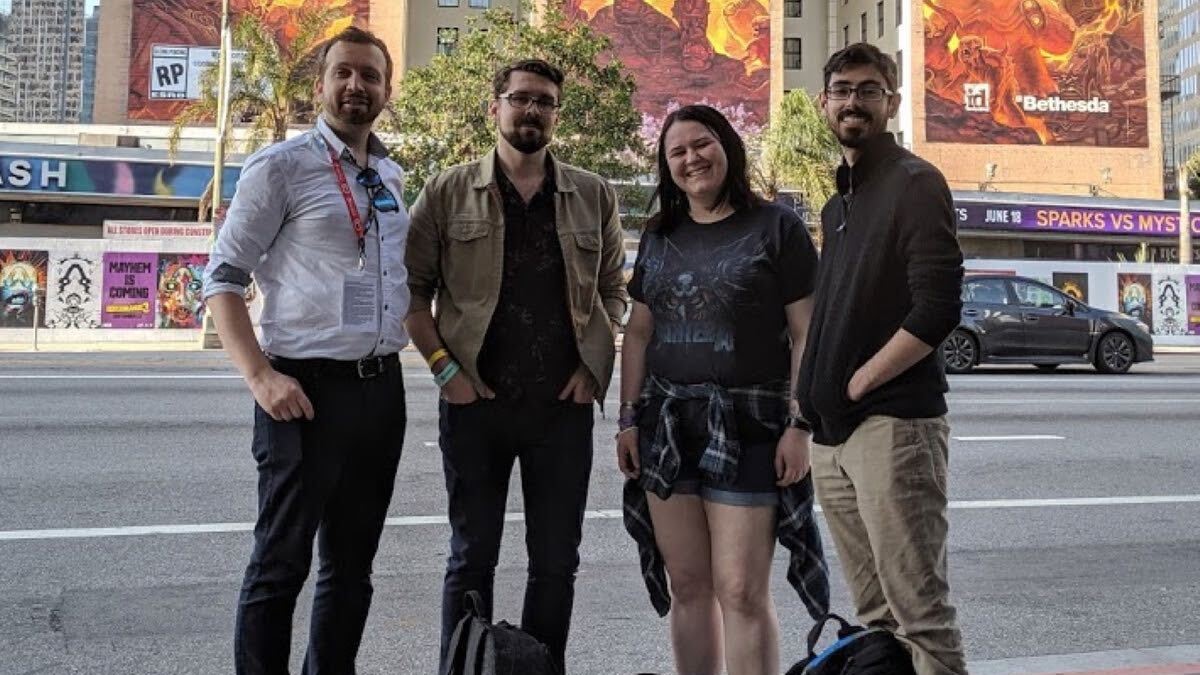 I’ve only ever been to E3 once: E3 2019. Like many gamers, the event had been on my bucket list since childhood, and I’m pleased to say it didn’t disappoint. The buzz in the LA Convention Centre was contagious and the possibilities seemed almost infinite. You can’t help but get wrapped up in it. “This is why I do this job,” I kept muttering to myself as I took in the giant booths and caught glimpses of developers I’ve always admired. I’m not afraid to admit I cried when Halo Infinite was announced.

But it wasn’t simply the adrenaline of the news beat or being among respected peers that made E3 feel special, but the feeling of belonging: these were my people. Teenagers excitedly reeling after getting their hands on the game they’ve been queuing all day for, parents carrying bags of free merchandise for their buzzing children, someone cosplaying as Kratos eating an oversized pretzel. Fans deserve this annual pilgrimage.

But that’s not to say that fans should have to attend in-person to feel part of the celebration.  Going to LA simply isn’t accessible to everyone and the pandemic has highlighted that E3, grounded in its physical location, has become somewhat out-of-touch in an always-online, digital world. Geoff Keighley’s stream-from-anywhere Summer Game Fest has only emphasized that.

That said, Summer Game Fest also feels somewhat disjointed compared to E3. Where E3 is several condensed days of events and conferences, Summer Game Fest instead acts as an overarching event for the publisher’s individual conferences. That means that announcements are more spread out and, quite frankly, it doesn’t really feel like a cohesive event, especially in 2021 when some conferences sat under either the E3 2021 or Summer Game Fest banner – or both.

While some may prefer E3, there’s no denying that Summer Game Fest is certainly more accessible (ignoring the copious amount of ads and sponsorship), especially during these uncertain times. Where E3 is primarily an in-person event, with conferences streamed, Summer Game Fest is entirely digital, streaming conferences globally but also offering fans playable downloadable-or-streamable demos to try out at home and teaming up with publishers for in-game events.

It’s the latter that is key here. Summer Game Fest lets players across the globe interact with the event from the comfort of their homes – which has never been as important as it is in the current climate. In contrast, E3’s recent digital offering simply hasn’t been of the same caliber, meaning it has become increasingly obsolete now that both national and international travel has become challenging.

For E3 to become relevant again, it would need to become more akin to Keighley’s event, at least in its digital form. The E3 app and site need to act as more than simply a schedule and map guide, instead perhaps offering interactive events, competitions and the ability to watch conferences on the go from anywhere. It could maybe even include some sneak previews and interviews to encourage the audience to actually engage with the content, making E3 a brand to be engaged with, not just a show. What Summer Game Fest does brilliantly is making its conferences and content feel interconnected, whether that’s through social media hashtags, celebrity endorsements, or in-game events. Geoff Keighley has his finger firmly on the pulse of the industry and it shows.

But the inexistence of an in-person element of Summer Game Fest (bar its Kickoff Live show) is certainly felt and that’s where E3 truly shines. That’s likely because E3 is first and foremost marketed as an in-person event, offering a fairground-like bonanza for gamers to explore. That feeling can’t quite be captured digitally: the feeling of being in a hall with thousands of others who are as excited as you are. That element is just one part of E3, though it’s one that’s leaned on perhaps too heavily. E3 does have the foundation of a solid hybrid event, as conferences are streamed globally and players get access to (albeit limited) demos at home via publishers. But the entire package needs to be wrapped up in a neater bow to succeed in a post-Covid world.

Perhaps E3 could even go one step further than that, becoming an in-game event in itself or (and I hate to say it) a metaverse experience, allowing those unable to access the in-person event to experience the gravity and scale of the conference without ever leaving their homes. Just imagine attending E3 in

Comic book fans have Comic-Con, motorbike enthusiasts have Sturgis, film fanatics have Cannes and motorheads have Goodwood. Whatever your hobby or interest, there’s probably one mammoth event to celebrate it that’s on your bucket list.

For gamers, that event is usually E3 – or, at least, it was. While E3 is technically a trade show, over the years the event has grown to become a celebration of gaming: media attends to report on the biggest upcoming games while fans attend to get their hands on the newest releases and to be among like-minded individuals. I can only describe it as a paradise for gamers.   Where else would the average person have the chance to play the upcoming Borderlands ahead of its release? To meet their favorite Twitch streamer in the flesh? Or even run into the cast of 13 Reasons Why?

But the Covid-19 pandemic has seen the event shift to being entirely online in recent years, as opposed to its previous form as an in-person show with conferences streamed online. Earlier this week, organizer ESA confirmed that, once again, there will not be an in-person E3 this year – in fact, it’s unclear if there will be an …read more