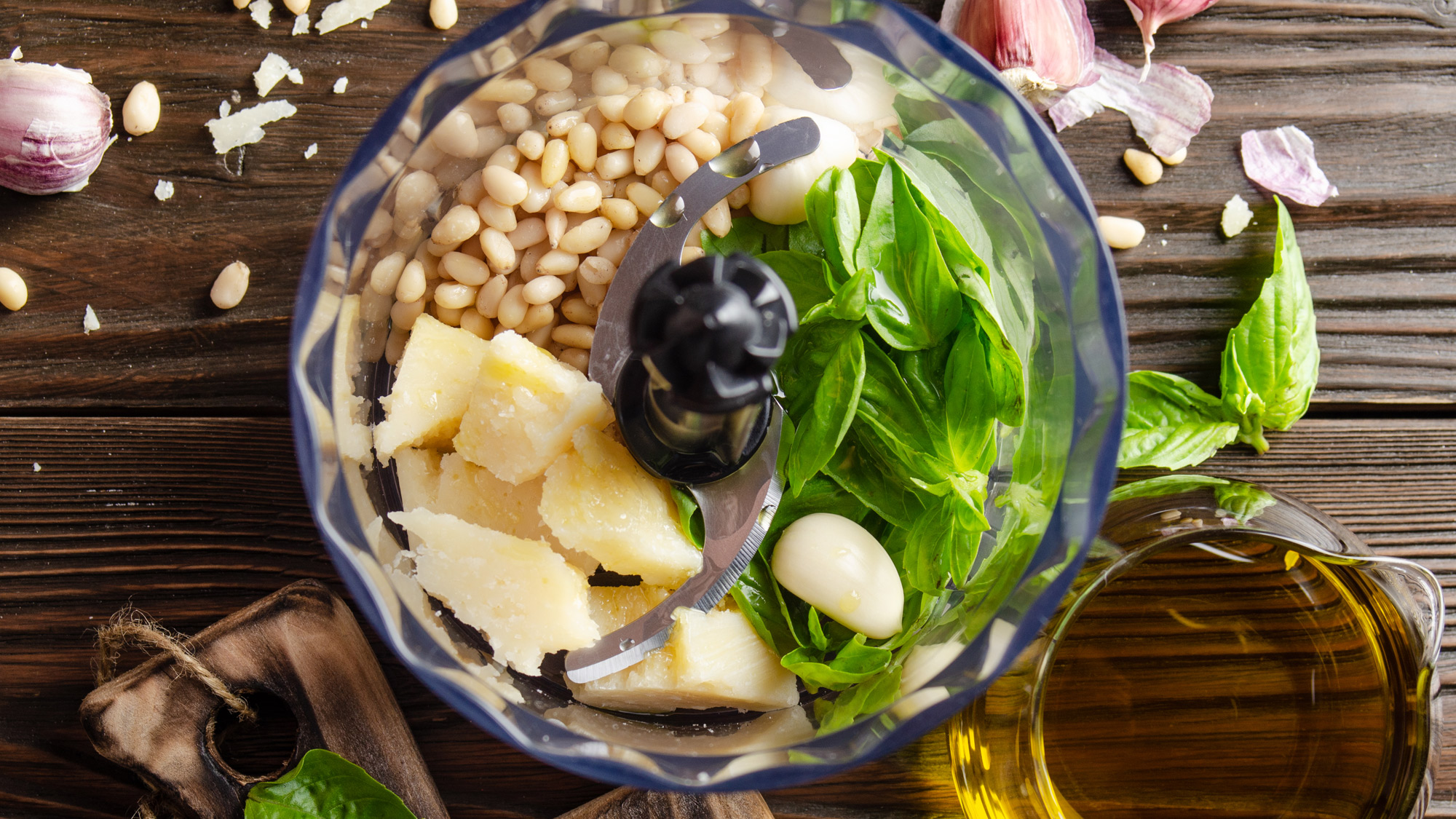 So how does a food processor work?

All of the blades and discs are removable and interchangeable. So, once you’ve decided which attachment you want to use and assembled the food processor, the motor then rotates the attachment at speed. In the case of the sharp chopping blades, they usually sit in the base of the bowl and chop foods as they rotate, they are useful for all kinds of tasks like chopping onions, herbs, and grinding beef.

Grating and slicing attachments are typically large round discs that are assembled so that they sit nearer the top of the bowl. The feed chute in the lid allows you to safely feed foods down the chute towards the slicing and grating discs using a plastic pusher, which means your fingers don’t come close to the dangerous fast-spinning blades. As you push foods down the feed chute, they get shredded or sliced by the fast-spinning disc and all of the sliced or shredded food drops into the bowl below the disc. Some food processors come with more than one size grating or slicing disc so you have the option to create thicker or thinner slices or choose between large or small shredding. Larger grating discs are perfect for shredding carrots and cheese, but a smaller disc will give you beautifully fine shredded chocolate.

Dough blades are plastic blades that aren’t as sharp as the metal chopping blades, so instead of slicing into it, they mix and knead the dough as they spin, they’re ideal for pastry or bread dough. But food processors aren’t as capable of mixing large quantities of dough as a stand mixer. Whisking attachments also rotate at speed to whip air into your cream or egg whites and they are often disc-shaped or have a mesh design as opposed to being more like a hand-held wire whisk.

At a minimum, the food processor will have one speed as well as a pulse button for short sharp bursts of speed, but it’s not uncommon to see models with two or more processing speeds. Many food processors also come with more than one bowl, the smaller bowls are useful for effectively chopping or mixing smaller quantities, they usually sit inside the main bowl and utilize smaller blades.

One of the big benefits of food processors is that they are usually designed with safety in mind. Most can’t be switched on until the lid is firmly locked into position. This helps avoid dangerous situations, but it is also one of the big reasons some people find this appliance tricky to assemble. Locking the bowl into place as well as slotting the lid into position sometimes has to be done in sequence. And unless correctly configured the appliance won’t start, which if you don’t have the manual to hand, can be confusing and frustrating. However, once you know the sequence or the exact way your model locks together it becomes second nature.

Due to the large pitcher-style bowl and sharp blades, you may be wondering if a blender can be used as a food processor or vice versa. Unfortunately, they can’t – partly because food processor lids are not usually leakproof, so it’s not advisable to blend large quantities of liquid-like soups or smoothies in a food processor. The second reason is that blender pitchers are tall and they’re designed to suck all the ingredients towards the blades, whereas food processor bowls are wider and flatter and better designed to evenly chop larger quantities as well as dry ingredients. There are of course some tasks, such as pureeing where you could use either appliance.

Whether you want to take the hard work out of chopping vegetables for salad or as the base for dishes like curry and ragu, or you simply want an appliance that offers a multitude of functions so you can declutter the kitchen countertop of your usual array of gadgets, one of the best food processors can be the savior of the home kitchen.

Food processors may seem like a slightly outdated gadget – in the UK the number of homes with a food processor has fallen to 38% from 50% in 2005, according to Statista. Whereas the ownership of the smoothie makers and the best juicers has increased in the same period.

The reduction in popularity isn’t surprising, not least because the assembly alone can be a mind-boggling task. If you own one of the best blenders or a stand mixer, for example, you may think that a food processor can’t add much to your kitchen or perform any more tasks than your current appliances. But once you understand what these versatile machines are capable of, and how they work, you’ll wonder how you ever managed without one.

Read on to find out just how food processors work, or if …read more