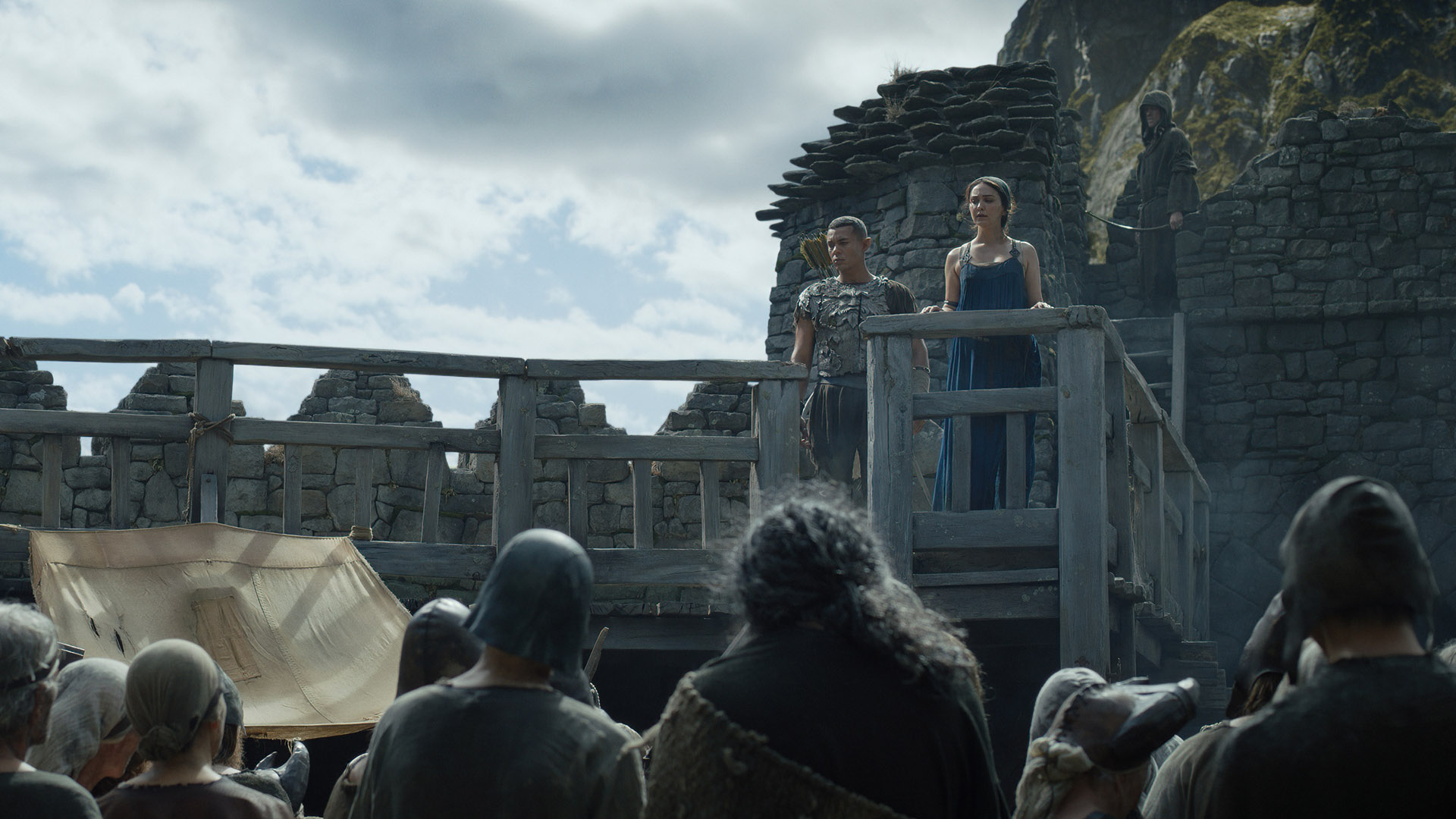 The Southlands is about to be ground zero for season 1’s main battle. (Image credit: Prime Video)

Of The Rings of Power episode 5’s four narratives, it’s the Southlands arc where that sense of hope is hit hardest.

With Adar wanting the Southlanders to bend the knee to him – and Sauron by proxy – Bronwyn and Arondir try to rally the townsfolk to stand and fight against Adar’s forces. It seems they’re successful, until Waldreg convinces half of Tirharad’s population to pledge their allegiance to Adar. Waldreg claims it’s the only way they’ll survive and leads them from the safety of the watchtower, much to Bronwyn and Arondir’s dismay.

It’s the first of multiple betrayals in Partings and one that’s steadily been brewing. Even so, it has the feel of a scene that should’ve closed out episode 4, rather than one that semi-opens episode 5 alongside the Harfoots (more on them later), which dilutes the gravitas of the situation.

That said, its inclusion in episode 5 leads into the most tragic scene in the series so far. After he pledges his allegiance to Adar and Sauron, Waldreg is handed a sword by Adar, who grabs Rowan (Theo’s friend) and forces him to his knees. Adar tells Waldreg that “only blood will bind” them, a move that seemingly results in Waldreg murdering Rowan to prove his loyalty.

It’s a dark scene that points to the evil in the hearts of men; something that foreshadows the corrupting power of Sauron on this race (and Númenor specifically) in future seasons. Still, it might have been more impactful if we’d seen the act play out on the screen. The Rings of Power isn’t averse to violence – we saw a warg brutally maul some people in episode 4, for instance – so there’s no reason why we couldn’t see this atrocious act carried out on the screen.

Back at the watchtower, after a heart-warming moment between Arondir and Theo, the latter shows Arondir the sword hilt he’s been hiding. Arondir recognizes the sword’s sigil, telling Bronwyn it was crafted by an ancient swordsmith and used to enslave the Southlanders’ ancestors. Bronwyn immediately loses hope that the watchtower’s inhabitants can hold Adar’s forces off. It’s an understandable reaction for Bronwyn to have, but one that feels like a heel turn, given how defiant she’s been in previous episodes.

It’s a U-turn all the more baffling with what happens next. A forlorn Bronwyn asks how long the remaining population could hold out against Adar’s forces before the watchtower falls. Immediately, she and Arondir realize they can use the watchtower to their advantage. Quite how they’ll do so isn’t clear but, thanks to Bronwyn’s “until this tower falls” line and expository panning up of the camera, it doesn’t take a genius to work out what their plan of action will be. Unlike the cut away from Waldreg’s character defining moment, it’s an expository scene we could’ve done without seeing.

There are betrayals in other episode 5 storylines, too, which shift the dynamics at play between certain characters.

Following a lavish Lindon dinner between Khazad-dûm’s dwarves and their elven hosts, High King Gil-galad reveals why he really paired Elrond up with Celebrimbor, which leads to Elrond reigniting his friendship with Durin: Gil-galad knows mithril exists and wants to use it to save the elves.

In short: long ago, an elven warrior and a Balrog fought to respectively protect and destroy one of Valinor’s two mighty trees. During the lengthy battle, the tree was struck by lightning, resulting in their combined powers – one “as pure and light and unyielding”, as Gil-galad puts it – seeping through the tree’s roots into the mountains to create mithril.

According to Gil-galad, mithril contains the light of the lost silmaril, jewels forged from the Two Trees of Valinor, and wants to use it preserve the elves’ immortality. As he explains to Elrond, the light of the Eldar is fading and, if it’s snuffed out, elves will become mortal. Celebrimbor knew this, too, which is why he was so keen to work with Elrond. The pair knew they could use Elrond’s friendship with Durin as a way to obtain vast quantities of mithril, bask in its light (which descends from the Valar), and remain immortal.

Read our other recaps for The Rings of Power

Full spoilers follow for The Rings of Power episodes 1 to 5.

The Rings of Power episode 5, titled Partings, is a fascinating beast. The latest entry in the hit Prime Video series is one packed with deception, with many of the show’s major players revealing their true colors and the surprising rationale behind the choices they’ve made.

The result of this character-driven treachery is the high fantasy series’ darkest entry yet; an episode that certainly foreshadows the dark before the dawn. But, as the core message at the heart of episode 5 demonstrates – one that J.R.R Tolkien fans will instantly recognize – not all those who wander are lost. And, despite our heroes temporarily straying from their honorable paths, the actions they ultimately take in episode 5 ensures that hope will endure, even in the face of adversity.

The Southlands is about to be ground zero for season 1’s main battle. (Image credit: Prime Video)

Of The Rings of Power episode 5’s four narratives, it’s the Southlands arc where that sense of hope is hit hardest.